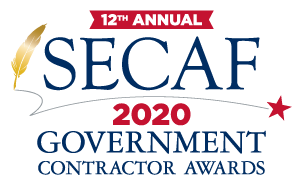 The Small and Emerging Contractors Advisory Forum’s (SECAF) Annual Government Contractor Awards honor
small and emerging government contractors from the greater Washington, DC metropolitan area
and the players in the industry that rely on small business.

Award winners will be selected from a group of finalists in the following categories:

Enjoy some photos of the 2019 Awards Gala!