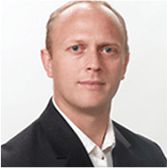 Ben Edson is the Founder and CEO of VariQ. VariQ has over 300 staff and is a fast-growing IT solutions consulting firm that designs, integrates, and operates technical solutions in primary areas of Cybersecurity, Enterprise Application Development and IT Infrastructure. VariQ has grown more than 940% growth since 2009.  In 2014, VariQ was recognized by Inc. magazine as a Five-Time Inc. 5000 honoree.  In the first six months of 2015, VariQ has been awarded more than $120 Million in new task order awards across a client base including 10 out of 15 Federal Executive Departments.

Prior to VariQ, Ben was the Security Architect at MSD and Security Consultant at Symantec where he performed numerous technical implementations throughout the United States and Mexico for Fortune 100 and commercial clients. Additionally, Ben was the Business Manager for The Family Missions, an international non-profit organization.