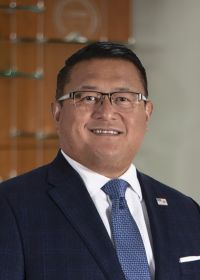 As CALIBRE’s President and CEO, Richard Pineda is responsible for establishing and overseeing the company’s strategic direction; establishing corporate policies; and managing the overall business, financial performance, and CALIBRE’s long-term growth. Mr. Pineda comes to CALIBRE through the company’s recent acquisition of Spear, Inc., a professional Information Technology (IT) solutions provider. He also serves as the President of SPEAR, A CALIBRE Company.

Prior to his current position as CALIBRE’s President, Richard served as the Co-Founder and Chief Executive Officer of Spear, Inc. Under Mr. Pineda’s leadership, Spear was one of the fastest growing privately held firms in the federal contracting industry, and was known for its IT expertise in the areas of cyber, data analytics, network, and end-user support. Spear grew to deliver solutions for clients all across the globe from 18 offices in 21 states. Additionally, Spear won the 2017 Greater Washington GovCon Contractor of the Year Award (up to $25M), won the 2017 Small and Emerging Contractors Advisory Forum (SECAF) Government Contractor of the Year ($12M-$25M), was named to the 2018 Best Places to Work list by the Washington Business Journal, was named to Washington Technology’s Fast 50 list of the fastest-growing small businesses for 2018 (#25) and 2017 (#5), and was recognized as one of Inc. 500 | 5000’s fastest-growing private companies in 2018 and 2017.

Before founding Spear, Inc., Mr. Pineda was President of Dell Services Federal Government, a Fortune 50 organization. There he was responsible for overseeing the company’s business operations and service delivery to its civilian Federal Government, Department of Defense, and National Security clients.

Mr. Pineda earned a Bachelor of Science in Finance from Virginia Tech and a Master of Business Administration with a concentration in Finance and Management Information Systems from George Washington University.

Mr. Pineda and his wife, Kathryn, have three children.